I remember in 1974 when my brother was born, how excited my father was at the time. It was important to him that the Macro name continue in perpetuity and birthing two sons—as my father and mother had—was imperative to maintaining the lineage of a waning familial name.

Truth be told, my father came from a family of four (three brothers and a sister) of which he lost an older brother to a childhood disease and another to World War II. And then to be raised by his oldest sister. A fantastic independent Italian woman, I remember her unrivaled kindness and generosity. She made the most incredible raisin-filled cookies.

As a father myself, my wife and I have raised three sons. As life continued, we watched our family grow to include two grandsons and miraculously—over COVID—my oldest son and his wife gave birth to a little granddaughter. That said, my youngest brothers (I have a half-brother from my father’s second marriage) both have sons. So, it would go without saying that our family (until 2020) was destined to bring boys into this world. I would often lament that our family has not seen a Macro girl for over three generations.

But I stand corrected.

I failed to recognize that my mother and father gave birth to a baby girl in the early sixties, who lived for only a week. Her name was Becky. She was born prematurely as my mother was a Type I diabetic and—at the time—the combination was proven to be complicated due to the lack of medical advancements available at the time. Becky would have been my sister, the oldest sibling of my immediate family.

I tell you this story, especially on the eve of Father’s Day 2020, to pay homage to her. I had forgotten her having never met her. Although she has a grave marker to remind us of her past, life’s progressions have rendered her memories limited to those who had the opportunity to experience her very short life. I often think about how my life would have been changed had she been exposed to the advancements in medicine that we have become accustomed to today. I think about all the advice she could have extended to me amongst the many questionable decisions I made throughout my life (like taking a semester off to sell grandfather clocks at the Wyoming Valley Mall).

So, to all women out there who have been forgotten, who have made unrecognized contributions to the world—albeit small or grandiose—I salute you. And, I salute Becky. 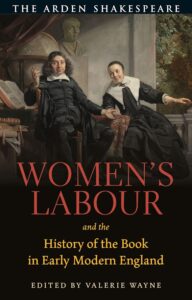 As this blog is in recognition of everything Graphic Communication, I was so moved by a recent book I acquired entitled Women’s Labour and The History of the Book in Early Modern England (edited by Valerie Wayne, The Arden Shakespeare, 2022). It is a compilation of essays that explore the roles of women in printing, publishing, papermaking, bookbinding, and book collecting alike. Dr. Wayne and her esteemed colleagues provide significant historical research into identifying the lost women who were integral to the purveyance of the printed book within the Early Modern Era in both England and the United States—intriguing stories of oppression, dedication, craftsmanship, and entrepreneurialism—unrecognized within the annals of history.

In my next blog, I will introduce you to a few of these interesting women who established presses or continued the production of book manufacturing in a time reserved only for men.

I can only imagine that my sister Becky would have made her own contributions to our ever-changing and reconditioning world. But I must first begin simply by recognizing Her, so that her memory is not lost to me, my family, or the world–for that matter.

Happy Father’s Day Becky. And to all women who have helped preserve knowledge, may the book continue to be written.