The Technical Association of the Graphic Arts (TAGA) established the Michael Bruno/TAGA Scholarship in 1988, honoring Mr. Bruno’s forty years of service to TAGA. 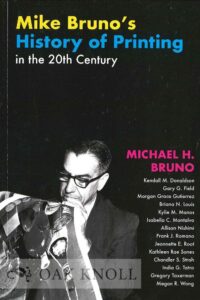 Mike Bruno’s professional career in the graphic arts spanned more than fifty years. During this time, he served in many capacities. He started as a research officer at the U.S. Army Map Service during World War II. Mike then held multiple positions within the Lithographic Technical Foundation over twenty-two years. These included Research Manager, Research Director, and Technical Director. He then became the Manager of graphic arts rese

arch and corporate consulting for International Paper and an adjunct professor at the Polytechnic University of New York.

Mr. Bruno is the author of Principles of Color Proofing and Label Industry Facts and Guidelines. He was editor of International Paper’s Pocket Pal and published his own graphic arts newsletter. In addition, he authored an annual report called the Status of Printing in the U.S.A.

Michael received many industry honors during his career. In 1974, he was the first recipient of the GATF Reed Technology Medal. He also received the Gold Medal of the Institute of Printing (England) in 1983 and the Electronic Prepress Pioneer Award from Lasers in Graphics in 1987.  The Friedman Memorial Medal for distinguished service to graphic arts education was awarded to him in 1988. The DRUPA Golden Pin Award was bestowed in 1990, in recognition of his reports on printing technology.

Want to know more about Michael Bruno? Watch this video from Frank Romano and learn how CalPoly Students Created a Book about Printing Pioneer Michael Bruno.

The Michael Bruno/TAGA Scholarship Scholarship is part of our Senefelder group of endowments. These are comprised of members that have made a gift commitment of $50,000 – $99,000. To read more about all of our endowed scholarships go to our updated online book. Learn more about the opportunities and benefits of creating an endowment with PGSF on our Endowments page. More questions – contact the PGSF Director of Development, Jeff White.